Almost every family has an oral history, the stories of ancestors to use as a starting point for genealogical research. With a little digging, you’ll find some stories turn out to be true, many have a grain of truth that’s been distorted over time, and some are complete fabrications. Proving or disproving family stories is one of my favorite parts of researching my family history. I think of it as Mythbusters, Family Edition.

My father’s paternal grandparents Adraste Lafleur (1874-1951) and Elodie Marthe Lafleur (1880-1965) were both born with the surname Lafleur, and grew up in the same locale in Louisiana. So close that in the 1880 census, their families were recorded only two pages apart in the 7th Ward of St. Landry Parish.

Many decades ago, when my mother asked my father’s relatives for names and birth dates for the family tree in our Bible, they were quick to point out that Adraste (Pépère) and Elodie Marthe (Mémère) were not cousins, and that Pépère’s Lafleur ancestors had come to Louisiana by way of Canada, while Mémère’s Lafleur ancestors had come directly from France. The family tree in Momma’s Bible records just one more generation back, with a father of Ulysse Lafleur for Pépère and Benjamin Lafleur for Mémère. Is this “Canadian French vs French” distinction accurate? Or were they actually related and if so, how closely?

The Myth, Part 1: Adraste and his wife Elodie Marthe Lafleur were not cousins. 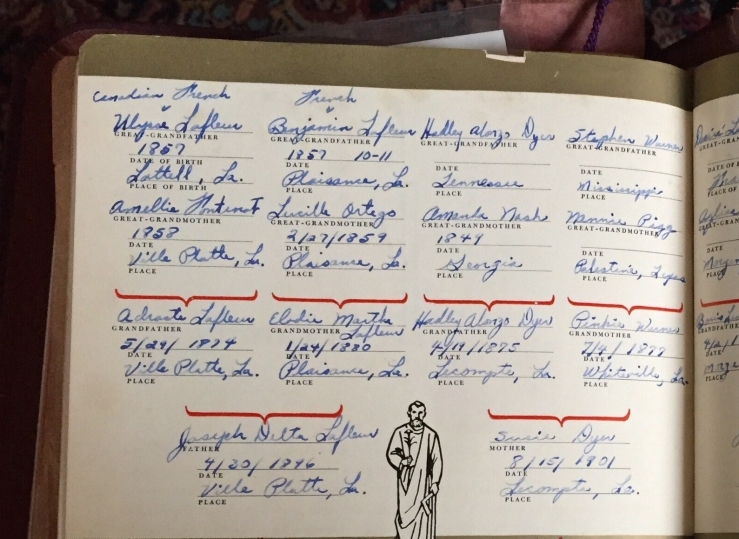 Growing up in Baton Rouge in the 1970s, the only people I knew named Lafleur were family members. My Catholic elementary school was full of kids with French names, but no Lafleurs. Ditto for the neighborhood. And there were certainly no characters named Lafleur in the books I read or on TV, except for Guy Lafleur, the all-star Canadian hockey player. I was really excited when I heard about him. Spoiler alert: He’s not a cousin.

One day when I about 10 years old, I thumbed through the skinny little phone book at my grandparents’ house in Ville Platte and saw page after page of Lafleurs. I incredulously asked my dad if he knew them all, were they our relatives? He shook his head “no” and simply said Lafleur was a common name in that area.

The Evidence: Atlas of Louisiana Surnames

In the late 1980s I found An Atlas of Louisiana Surnames of French and Spanish Origin at a bookstore in Baton Rouge. Using 1981 telephone book listings in Louisiana, Texas and Mississippi, LSU professor Robert C. West mapped clusters of surnames. I flipped quickly to the Lafleur page: 818 Lafleur families in Louisiana and east Texas, with an epicenter at my father’s hometown of Ville Platte with 200 families. I bought the book.

Along with the maps, the book details the origins of each name in the region. Like so many other French names, the Lafleur name came to Louisiana through a single family, in this case one headed by Jean-Baptiste André dit La Fleur. Their surname was actually André. La Fleur was a “dit” name or nickname that the family later adopted as their surname. For those who didn’t study French: La Fleur means “the flower.”

In the early to mid-1700s, Jean-Baptiste and his sons Jacques and Pierre were soldiers at Fort Toulouse on the eastern edge of the France’s Louisiana territory, near today’s Montgomery, Alabama. When France lost the French and Indian War in 1763 and ceded control of what’s now Alabama to Britain, Jean-Baptiste André dit La Fleur and his family moved west to the Spanish territory of Louisiana, settling west of the Mississippi River at Pointe Coupée and later the Opelousas Post near today’s town of Washington, Louisiana.  The book also gave histories of several other “Alibamon” families who joined the Lafleurs in this migration, including the Fontenot, Guillory and Brignac families.

Map courtesy of Louisiana Historical Quarterly, April 1920. The location of Fort Toulouse is marked as Alibamous. The community of Pointe Coupée was located near the Tonicas village. The Opelousas Post is unmarked, but about 40 miles due west-southwest of Tonicas.

In the 1990s my sister Carol bridged the four generation gap between those first Louisiana Lafleurs and our great-great grandfathers Ulysse and Benjamin Lafleur listed in the family Bible. This huge undertaking was only made possible by the Diocese of Baton Rouge Catholic Church publishing its sacramental records. Carol pored over the set of volumes at the Louisiana State Archives, carefully matching names in baptismal, marriage and death records in a world where most girls were named Marie, most boys were named Joseph, and names had inconsistent spellings. For added complexity, Spanish priests sometimes translated names from French to Spanish, so Jean-Baptiste might be Juan Bautista and Anne-Marie might be Ana Maria.

What’s more, the church records showed Pépère and Mémère as cousins through intermarriage with those other Alibamon families who migrated to Louisiana:

Through Ancestry.com, I was able to reproduce and extend Carol’s results and generate this family tree for Pépère and Mémère with common ancestors color-coded and highlighted. Take your time, it’s complicated.

As for French Canadian vs directly from France, we can’t resolve where Jean-Baptiste André dit La Fleur was born or lived before he moved to Ft Toulouse. But it’s clear that both Pépère and Mémère had French ancestors who arrived in Louisiana from Canada and from France directly.

The Verdict: Adraste Lafleur and Elodie Marthe Lafleur were 3rd Cousins with multiple connections through the Lafleur, Fontenot, Guillory and Brignac families.

The Verdict, Part 2: Their common ancestors came to Louisiana through Alabama. Other French ancestors arrived via Quebec, Acadia and from France directly.

Epilogue: I recently found this article from the Ville Platte Daily World, July 1976 in the newspapers.com archives. It confirms the Lafleur lineage as reported above and suggests that the Lafleur soldiers in Alabama originated in Brittany, France. Perhaps someday we’ll have more evidence for another episode of Mythbusters, Family Edition.

Do you have a family story that you have myth busted? How true did it turn out to be? 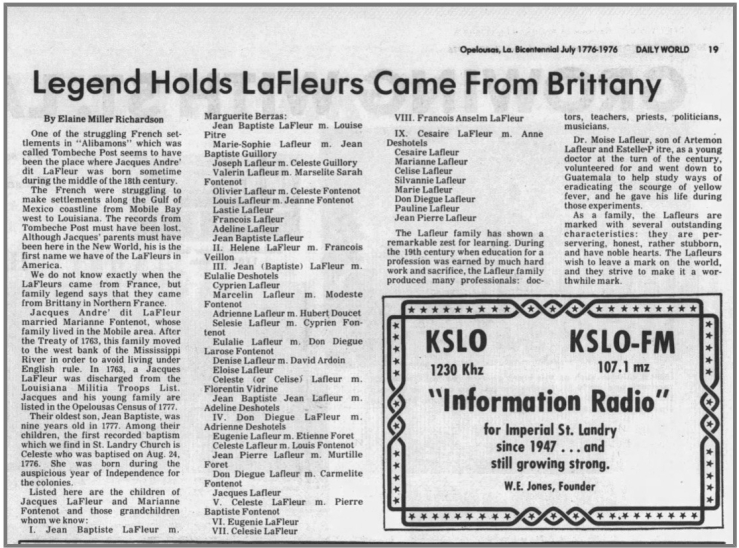 View all posts by ladyfleur